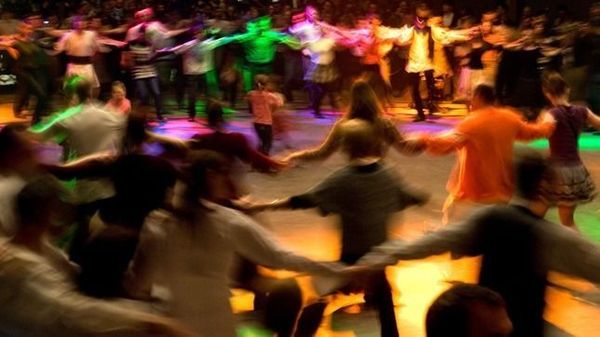 Trad-Mad is new initiative in Dublin based on traditional dances and music which has evolved all over Europe for centuries, and continues to do so today. Casting aside the nationalism, gender roles and silly costumes so commonly associated with “folk dance”, Trad-Mad focuses on the intense, flowing connection between dancers, music and musicians as everyone involved improvises and reacts to each other. Because we are based in Dublin we will be dancing to traditional Irish music too!

If that sounds like fun, come along and learn the basic grooves for a variety of common dances from many european countries ( Circle, line and couple, French Bourreés, European Salsa aka Schottisch, Czech Polka, Austrian Waltz, Tango from Warsaw, French Mazurka, Polska from Sweden…and many more!) as well as techniques for building connection with your partner and the music, and ideas for improvisation and variations.

For centuries, dance manuals and other writings have lauded the health benefits of dancing, usually as physical exercise. More recently we've seen research on further health benefits of dancing, such as stress reduction and increased serotonin level, with its sense of well-being. <br> <br>Most recently we've heard of another benefit: Frequent dancing apparently makes us smarter. <br> <br>A major study added to the growing evidence that stimulating one's mind by dancing can ward off Alzheimer's disease and other dementia, much as physical exercise can keep the body fit.

No need to bring a dance partner along if you don’t have one, you’ll probably end up dancing with everyone anyway :)