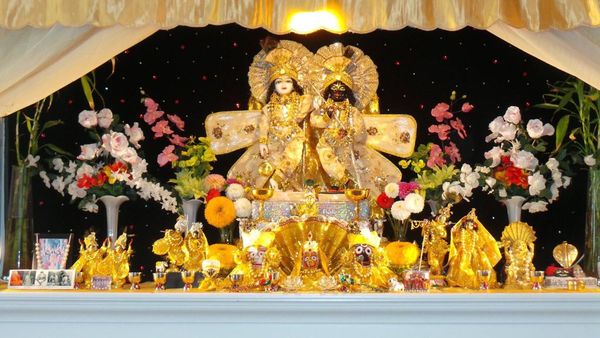 On the order of our spiritual master and founder of the Krishna Consciousness Movement, His Divine Grace A.C. Bhaktivedanta Swami Prabhupada, the devotees of the Vancouver Krishna Balaram Centre began to hold regular programs as a way to spread this Krishna Consciousness Movement. These programs are open to anyone who is interested in elevating themselves onto the transcendental platform by the means of spiritual activities (bhakti-yoga). The stage of highest perfection in yoga can be attained only by bhakti-yoga, as is confirmed in all the Vedic literatures. The Vancouver Krishna Balaram Centre is a place where one can engage themselves in the following spiritual activities every program:

Bhagavad-Gita As It Is (reading & discussion)
In the Vancouver Krishna Balaram Centre, the members read/hear from the original books written by His Divine Grace A.C. Bhaktivedanta Swami Prabhupada. In every program, one verse is selected and read from the Bhagavad-Gita As It Is. Bhagavad-Gita was spoken by Krishna (God) to Arjuna, 5000 years ago on the Battlefield of Kurukshetra. Bhagavad-Gita means “The Song of God” and it is accepted as the authority in which guidance is taken. By hearing these transcendental topics, the dormant God consciousness within every living being again becomes revived, making one’s life a success.

Prasadam (eating of sanctified vegetarian food preperations)
Prasadam is foodstuff that is first offered to Krishna. Prasada means mercy which is Krishna’s special favor to us. So by eating prasadam, one can become spiritualized.

During programs at the Vancouver Krishna Balaram Centre, prasadam is served to the devotees at the end of each program. All foodstuffs are organic and vegetarian which is healthy for everyone.

If you are interested in participating in the programs, full of spiritual activities (bhakti-yoga), or if you want to learn more about the Krishna Consciousness movement, please feel free to contact us. Bring your friends and family members – everyone is welcome!

For more information on the location, please contact the organizer.